"Descendants of the sun" found a home in Greece

Αναρτήθηκε από Tsakiris Travel την March 24, 2016
It was one year ago when the Korean Ambassador in Greece informed us that South Korean TV Channel will produce its new TV series in Greece. So now, we are proud to say that the TV drama "Descendants of the sun" was filmed here in Greece, promoting the sites of our country to South Korea and east Asia. Thanks to the popularity of the Korean Wave, the Korean dramas are being broadcast everywhere and million of people all over the world are having a small glimpse of the famous islands of our country.  But let's look at the filming locations shall we?

Korean broadcasting corporations are not unfamiliar with Greece. We have already talked about the filming of another tv variety show in a previous post. So KBS in their search for isolated places and iconic scenery they came to Greece. After a research they reached to three destinations. (I was even interviewed once by KBS, but luckily the footage wasn't shown)

So if you are watching "Descendants of the sun" and you are wondering where in the world you can find these dreamy places, you are in the right place. Let's begin.

I will start with my personal favourite destination which actually is the  closest to us in Thessaloniki. 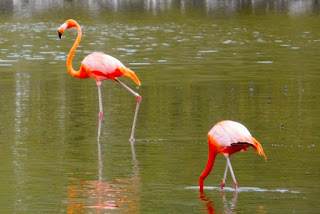 Lemnos / Limnos island: Lemnos is an island of the northern aegean sea, so don't expect the typical architecture that you meat in the island of Myconos or Santorini. The land of the island is dry and rocky creating a unique landscape. Here you will find even as small desert, right above the beach of Gonati there is an area named Amothines (dunes) the local claim that this is the only desert of Europe. Indeed the landscape is outlandish. No wonder KBS choose it as a filming location. There you can meet the ruins of a Byzantium Castle and the tower of Megisti Lavra. One  of the most important wetlands of the Aegean Sea is found on the eastern part of Limnos. The wetland of Chortarolimni-Aliki expanding over an area of 18.000 acres is comprised of a cluster of three lakes. The geographical location of those lakes is extremely important as it acts as a resting and wintering station for many species of migratory birds. Including Flamingos. So there you go have a reason to visit Lemnos for both winter and summer time.

Arachova: In a previous research for this blog post, I realised that this is might be a personal suggestion from the Korean Ambassador as it seems he enjoys going in Arachova for ski. Arachova is a main winter resort for the habitants of Athens. But Arachova rocky scenery and the mountainous area make the area an all year destination for travellers of Greece. Another secret of our inbound tourism has been revealed. It is a small city built in the slopes of Parnassos Mountain, during the winter thanks to the close winter resort it becomes a very popular destination. Arachova is a good example of the rural architecture in the mountains. Time to visit? All year long, winter for ski, spring for wanderlust and summer because it is summer and you need a cool place to go, away from the city's hot atmosphere.

Arachova from Above from PreProduction on Vimeo.

I have left the  most popular and famous place on my list for the end. That is the famous island of Zakynthos. Even if you are not aware of Greece, Greek history or even Greek mythology you have definitely see the famous beach of Navagio somewhere in the Internet, or maybe in a Greek restaurant near you. Zakynthos or Zante as foreigners call it, is located in the west side of Greece and it is the 3rd largest island of the Ionian Sea. Zante is popular during summer with a big number of tourists travelling from Europe with direct flights. It is a rather busy and crowded place during the summer. During Greek Orthodox Easter the unique celebrations of the island attracts travellers from all over Greece. Best time to visit Zante is spring and the summer, after all you can risk a bad weather for your visit to Navagio which is only accessible by sea.

Treasures of Zakynthos - A Timelapse Film from Maciej Tomków on Vimeo.

In my research for this post, I spoke with people from all over Zante and they were really proud to have welcomed the Korean Team of  KBC and the "Descendants of the sun" Cast, all the local were curious on what's going on since they weren't informed in advance. Some of them told me that they regret they couldn't interact more with the crew and the actors but they all wanted to watch this Korean Drama on TV.  Maybe this is a start of a new chapter.

From our side we are really grateful that KBS choose our country for the filming locations and for indirectly and simultaneously promoting Greece all over the world.