Αναρτήθηκε από Tsakiris Travel την August 02, 2017
Have you ever dreamed watching an Ancient Greek Play in an ancient Greek Theater?
One of the things to do the next week in Thessaloniki is  to join us in our evening trip to Dion
and watch together the Theatrical Play "Seven Against Thebes" by Aeschylus.

“Seven Against Thebes” by Aeschylus staged by the National Theatre of Northern Greece, a production which was greatly appreciated both by the critics and the general public last summer, is repeated again this year.
About The Play:

The conflict between the two sons of Oedipus is the theme of “Seven Against Thebes”. After his appalling actions were revealed to him, Oedipus left the throne to his two sons, Eteocles and Polynices. The two agreed to rule Thebes alternately. However, when the time came for Polynices to take reign, Eteocles did not keep his promise. This provoked the wrath of Polynices, who allied with the king of Argos Adrastus and organized a military campaign against Thebes. Seven leaders of each of the two rival armies lined up on either side of the seven gates of Thebes. Eteocles and Polynices faced one another in front of the seventh gate. Eteocles is the lonely main character of the tragedy. Thebes is under siege and he is trying to organize a counter-attack in a battle doomed to end without a real winner.

About the Theatre of Dion:
The ancient theatre rests to the south of Dion, out of the city limits, having to the west the sanctuary dedicated to Demetra. Its construction dates to the Hellenistic era, probably in the reign of King Philipp V (221-179 BC). Built on the slope of a low natural hill, the theatre is facing north-east: this is the best orientation for maximum ventilation, according to posterior instructions by Vitruvius. The architect who designed this monument exploited the morphology of the ground; through partial removal of accumulated earth and creation of an artificial fill, he shaped a most successful accomplishment bearing his stamp.

You can find more info regarding Dion in our previous post, or by clicking here. 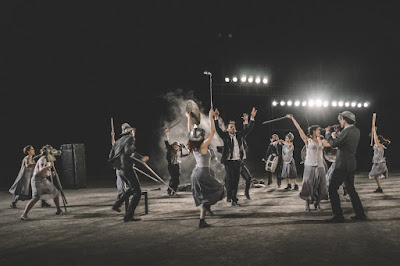 Our trip to Dion will start in the 11th of August from Thessaloniki Centre. The distance between Dion and Thessaloniki is about 92km, and the trip lasts approximately 1 hour and half. We will head directly to the archaeological site of Dion where we will tour the site and the museum and after a small break of 30 minutes we will meet outside the ancient theatre where at 21:00 (9pm) the play will begin and will last about 2 hours and a half.

So make your dream come true and watch an ancient Greek Drama in an ancient Greek theatre. Participation costs 35€ per person and includes the Play and the transfers. Entrance fees to the archaeological site and the museum is not included (8€ per person).

Thessaloniki offer a genuine travel experience. Away from the mass tourism centres of the Greek islands, here you will find original hospitality, people who are happy to welcome guests and of course the real daily life of Greece. So join us for this one time only trip and watch an Ancient Greek Play just like a local.