Monday Updates fot the weekend of 25th of October

A new week has arrived and the next busy weekend is only 5 days away!! This is going to be a rather busy week for us, since on Sunday the 26th of October it’s a Bank Holiday here in Thessaloniki.
On the 26th of October 1922 Thessaloniki was liberated by the Greek Army and officially joined the Hellenic Republic. This year marks the 102 second anniversary. On the 26th October also Saint Demetrius name day is also being celebrated. While this bank holiday is local, the 28th of October is a bank holiday celebrated all over the nation as "Ohi Day" took place. On that day all over Greece young people from the local Schools march in every local community in a form of a parade. In Thessaloniki that date marks the biggest parade in the country with all military forces, schools, cultural clubs marching in the city. So if you are visiting Thessaloniki this weekend you will have a lot of things to do and see. You will experience a quite patriotic side of the city. I think for some of you it will be interesting to see all these people marching with the sound of the military bands.. Don’t be lazy wake up early and give it a try!

This holiday also marks the end of October and the beginning of November with the Thessaloniki Internaional Film Festival to be around the corner. We actually look forward fot this event every year....You can visit the official site of the the 55th International Film Festival and look for the screening schedules, tickets price and other events  to find the most suitable date for you to visit the Festival. It's a rather busy period for Thessaloniki so you better make reservations on time.

Now as for us, the following weekend it will find us visiting Istanbul. We will start our excursion from Thessaloniki on the morning of the 25th of October to visit our neighbor Turkey. We will stay for 4 nights in Ibis Hotel Istanbul choosing this hotel of its great location (not very central but not isolated either) and their excellent services.

In our years of operation Istanbul is a destination that has defined our company. We will once more explore the beauty of the city which stands between European and Asian continent, a colorful kanvas decorated by the traditions of the nations living in the city.
(for more detailed schedule of the excursion and prices please feel free to contact with us)

For those we will stay in the city of the weekend we have arranged another rural activity. As we did yesterday with our visit in the Mushroom festival in Larissa this weekend we have organized an excursion to "Chestnut Festival in Griva". So on the 26th of October if you are visiting Thessaloniki you can also join us on that rural excursion to the Greek country side. We are going to visit the wider area of Goumenissa (its few kilometeres east of Thessaloniki) and Griva and Kastanohori (Chestnutvillage exact translation) and Livadia. Those areas are the biggest Chestnut production areas in Greece, exporting chestnuts and chestnut related prodacts all over the world. 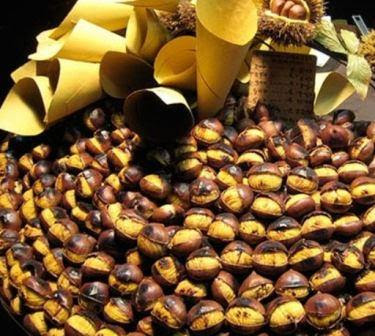 The well organized local community it will host for 18th consecutive year a Chestnut Festival where there we will have the opportunity to attend guided tour in the forests, where we will learn about the Chestnuts production and history. We will also be able to gather our own chestnuts and we will continue with the festivities that will take place. The famous traditional group of Goumenissa will be responsible for our entertainment and our introduction to Balkan music and the local music. "Halkina tis Goumenissa" as they called use bagpipes, trumpets and drums to make music, creating like this a "noisy" yet attractive music background to our visit. Of course you will have the chance to mingle with the locals and taste the various Chestnut recipes, the local wine and Cheese production. Should you want to join us the cost of the excursion is 10 € per person and extra 3 € for the Guided Tour.

Travel with us!!!
Lisa