Greek Beauty not in crisis

So March is already here and have you still didn't visit Greece? Why don't you follow the example of one of our favourite show from South Korea and visit Greece?  March was always described in Greek Mythology and rural stories as the youngest of all months and of course the more spoiled one. Our stories describe months as 12 brothers the oldest and wisest is December but the youngest and more vivid is March. As he is the first month of the spring, born in the period where the land is waking up after the long winter. March is a moody child who always causes problems with his misbehaviour and his pranks...This explains why the weather here in Greece changes constantly.

"March sometimes laughs, sometimes cries" we say in Greece. So one day is raining and the other day is hot as summer. You never know what to wear during March. For example the last few days were really Sunny, but today the cold is so strong that it actually snowed in the mountains around Thessaloniki. So while the trees and the flowers are efflorescent the weather ...is not...So please spring do come soon...it was a cold winter this year. 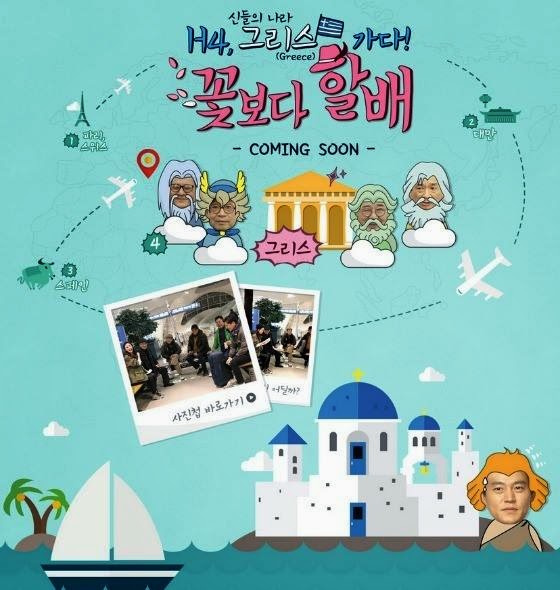 So while we and our colleagues are getting ready for the Easter and Summer holidays some really well known travellers visited Greece. March was the month that Greece welcomed a rather colourful and very active group of guests. The members of the Korean TV Show "Grandpas over flowers". This group of well known artists from Korea visited and filmed their show in Athens, Santorini and Korinthos. Their show and their bright personalities will showcase our country's beauties in the distant South Korea.  Also Greece has quietly and discreetly welcomed another South Korean artist who is famous not only in his country but all over Asia as well. Taecyeon is a singer / actor / performer, member of the music group 2PM in South Korea, but he is also well known as an actor in Japan. He visited Athens and Meteora and we really hope he enjoyed his stay in Greece.

The friendship between South Korea and Greece can be tracked back to the Korean war when Greece send soldiers along with NATO. I think the majority of the soldiers were from our city Thessaloniki. (But having said that...I am not so sure if I am correct) Well at least one of our formers mayor was one. Thanks to him Thessaloniki has became a sister city of Busan in South Korea and we even have our own Korean monument to honour the soldiers who participated in that war. From times to times there are exchange programs between those cities. That's why we hope to welcome more Korean Tourists in Thessaloniki.

In the 25th of March we also celebrate the start of the Greek revolution of 1821. In 1821 after  being part of the Ottoman Empire, the people of Greece started the great rebellion and managed to create the modern Hellenic Republic. Thessaloniki, after 91 years of struggle has managed to join the Hellenic Republic only in 1912. So the 25th of March is a very important day in Greece. So if you are visiting Greece the next few days, don't forget to watch one of the parades that will take place near you.

Ps: "Grandpas Over Flowers broadcast will be on the 27th of March, more information you can find in the official site of the show. Just click here"
Ps2: "for more active updates join our Facebook page https://www.facebook.com/tsakiristravel"