GreeK Summer with a K!!

Well in Japanese "mythology" or their folkore stories, is a green creature that looks like a turtle, if we can say, it is a water diety. Kappa have been used to warn children of the dangers lurking in rivers and lakes. For more information on those mysterious creatures of the Japanese folkore click here.

While here in Greece Kappa is the 10th letter of the Greek alphabet, used to represent the /k/ sound in Ancient and Modern Greek. Letters that arose from kappa include the Roman K and Cyrillic К.
Greek proper names and placenames containing kappa are often written in English with "c" due to the Roman's transliterations in to the Latin Alphabet ex Corinth Crete etc. All formal modern romanizations of Greek now use the letter "k", however: Thessaloniki, Kalamata, Nikaia. (source wikpedia)
So Today I just randomly decided to show you 5 Islands with a name starting from K (Kappa) in Greek! 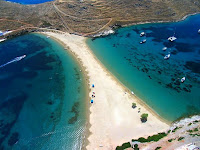 Kythnos is a typical agean see island in Cyclades. Together with Kea, they are the closest islands to Athens, thus popular for the weekend trips from Peraias harbour, all year long. The beautiful free from beach bars and touristic manipulation beaches, the picutresque main city of the iland and the free and the naked lanscape of the island, pose it as in ideal destination for cheap, quite and low key holidays.

Kythira:  is located oppopposite the south-eastern tip of the Peloponnese peninsula. It is traditionally listed as one of the seven mainIonian Islands, although it is distant from the main group. Administratively, it belongs to the Islands regional unit, which is part of the Attica region (although at large distance from Attica itself).For many centuries, while naval travel was the only means for transportation, the island possessed a strategic location. From ancient times until the mid 19th century, Kythira was a crossroads of merchants, sailors, and conquerors. As such, it has had a long and varied history and has been influenced by many civilisations and cultures. This is reflected in its architecture (a blend of traditional, Aegean and Venetian elements), as well as the traditions and customs, influenced by centuries of coexistence of the Greek, Venetian, and Ottoman cultures.  According to Plato, Kythira was the origin of the Celestial Goddess Aphrodite (Aphrodite Urania  and note that Aphrodite Pandemos is a different one).

Crete Island (Notice...that in Greece we call it Kriti )

Crete: Does the island who gave us Minotaur, King Minos, El Greco, Zorba and Kazantzaki needs an introduction? Crete land being, isolated and fertile was the land of the Minoan civilisation. Since then Crete offers artists, painters, writers and musician to the world. Cretan's culture is totally different from the rest of the mainland Greece. It's and Island where they value of Hospitality is really high and those who visit the island always come back. Europe discovered Crete as a travel destination really early and it has become a loving destination. Crete is a home of many and a country for all. But be careful, don't upset the people of Crete, cause when they stand united miracle can happen. In time of despair Cretans where the first to corner the  Nazi Army of Germany.

Karpathos: To be frankly that's where I want to be. Karpathos is an Island between Rhodes and Crete and to be frank is a remote island with not so many visitors during winter time. Because of its remote location, Karpathos has preserved many peculiarities of dress, customs and dialect, the last resembling those of Crete and Cyprus. The island has also been called Carpathus in Latin, Scarpanto in Italian and Kerpe in Turkish. This is an island that has a well organised tourism industry in the south, but at the same time offers alternative experiences to those who want more than a package holiday in Greece. Our advise is to visit this island and explore every little corner of this remote floating paradise.

Corfu: Well if Vienna is the music capital of Europe, then Corfu is the music capital of Greece, as there you will find all the Universities of Greece dealing with Classical Music. Corfu is a popular since the times that Empress Elizabeth of Austria choose Corfu for a fresh rest cure. Corfu is a green island and to us the Greeks it reminds us more a venetian island than a Greek one. Italy's culture has effected the land and the culture of the locals making them more eager to deal with arts and music. In Corfu you will also find the only Asian Museum of Greece. Famous for it's Japanese Artifacts, the collections of the museum have been also presented in the MET Museum of New York and in the Edo Museum of Tokyo.

As for me, Crete has a special place in my heart as I lived there during my college years standing Hotel and Tourism Administration and Corfu was the island the first island I visited as a young adult. I have fell in love with the kind and artistic people of Corfu and I have fell in love with the strict but yet warmhearted peple of Crete.
Come join us to discover Greece!