Αναρτήθηκε από Tsakiris Travel την June 16, 2017
The closest archaeological site to Thessaloniki is that of Vergina. Vergina stands now on what it was Aigai, the first capital of  Ancient Macedonia. It was here in 336BC that King Phillip II was assassinated in the theatre and Alexander the Great was proclaimed King.

At the Museum of the Royal Tombs of Aigai you’ll have the chance to admire the royal tombs, the wreaths of gold, the shrines bearing engraved the famous sixteen radii star of the ancient Macedonian dynasty, the armours and all the precious discoveries of the tombs of the Macedonian kings that came to light just four decades ago. 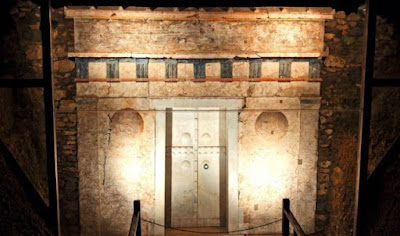 The visitor descending into the underground area of the tombs begins his tour with a reconstruction of the Great Mound, the monument that originally marked the site of the Royal Tombs and which no longer exists. Next are grave stelai and finds from tombs of ordinary Macedonian citizens, who after their death became neighbours of the king, and whose presence provides a yardstick of comparison. The ruined 3rd c. BC tomb, the collapsed heroon, cult place of the kings, the fascination and sorrow inspired by Persephone's abduction prepare the visitor as he approaches the dead king. 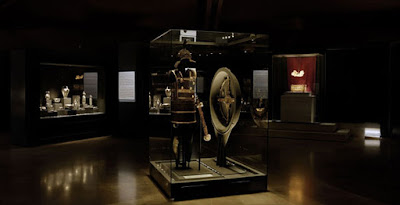 Philip now takes the stage.  His splendid weapons vividly convey the feeling of the ruler's power. The pile remains of the funerary pyre, found scattered all-over the tomb, are reminders of the tragic holocaust and at the same time an allusion to his passing into another dimension. Next comes the gold coffin (larnax) that contained the bones of the heroozed King Philip II, and the oak crown worn by the dead man. The Gold rnax Lait is made of 7,820 gr. of hammered pure gold. Its lid is decorated with a 16 - rayed star symbol and two rosettes, the inner of which is filled with blue enamel. On the sides relief palmettes and lotus buds frame five enamelled rosettes. TThe feet are decorated with rosettes and end in lion-paws. The gold oak crown is the heaviest and most impressive wreath surviving from Greek antiquity. It has 313 leaves and 68 acorns and weighs 714 gr.

The exhibition is dedicated to the memory of Professor Manolis Andronikos, the archaeologist who brought the treasures to light and had the knowledge and perceptiveness to recognise them for what they were.

We combine the day trip to Vergina with a visit to the Holy Monastery of Saint Prodromos of Veria, where we can enjoy the breathtaking view of the river of Aliakmonas. We then visit the Museum of the Royal Tombs of Aigai, which is situated at the border of the village of Vergina.

Join us on our day trip to vergina!! Send your requests for more info and details regarding both tours to tsakiristravel@hotmail.com or to info@tsakiristravel.gr

Entrance Fees:
All the citizens of countries – members of the EU over 65 years of age by showing their ID Card or Passport and all students of countries outside the EU by showing their student card are entitled to reduced admission to the Museum of Vergina (6€)
Full fee €12 Reduced fee €6
Combined ticket: Full fee €14
Combined ticket: Reduced fee €7

Have you visited Vergina? Let us know your oppinion on the comment section below!